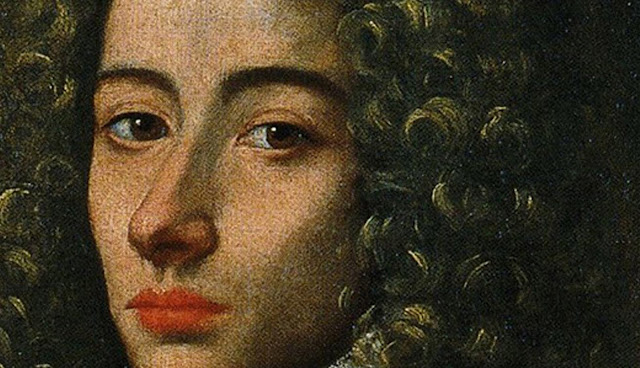 Naples.
As a young boy he was a sopranist then concertmaster in the Conservatory in Naples since 1729; his first oratorios and operas were performed a few years later Salustia in 1731. It was the beginning of the Opera Seria. His career flourished; he became a conductor at the court of the Prince and many of his operas were put on stage.
The intermezzo musicales inserted in the interludes of the long many-act operas were quite successful and even became more popular with the audience… 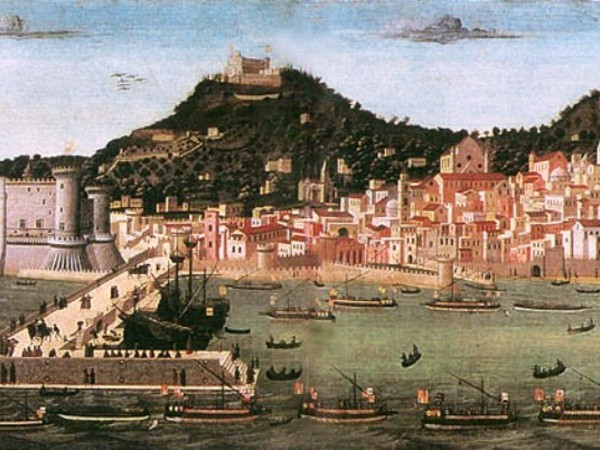 There was a change of rulers - Charles Bourbon 1735 - the position of his patrons altered, therefore, he made a short detour to Rome where he was also cheered. He fell ill with tuberculosis so he returned to Naples, then he moved in a Capuchin monastery in Pozzuoli where he started to compose Stabat Mater which he completed on the day of his death in 1736.
He was very young, barely 26. 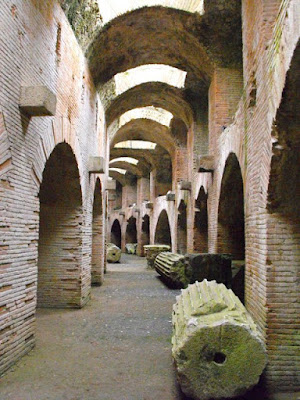 Stabat Mater became very famous.
Deservedly.
As for the records the situation is favourable; the general level of standard is fairly high. Right now I touch upon three - the middle one is far too hard to obtain these days.

This nice blue has a firm fan base: 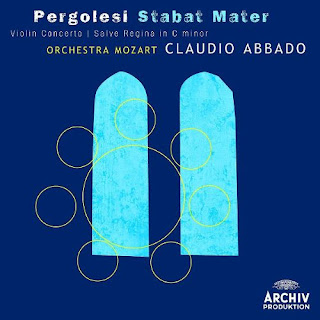 Abbado recorded it with an excellent orchestra and gorgeous singers; one of them is my favourite - the contraalto from Venice, Sara Mingardo. Fine, grandiose drift, beautiful continuo-organ brace; slow flow, a bit like a mourning mass; the linked part might be part of a nice Bach cantata. The bowers and the orchestra are playing tenderly and delightfully. The two singers are gorgeous all and singular alike; Sara Mingardo’s voice makes us shiver. Ceremoniousness, elegance, unbelievable empathy.

The sound quality is very good, a slightly dark shade just like the music; it twists your soul if you listen to it on a fine chain. Practically, you are right to say that it is a main standard; the one making a halt here cannot be wrong.

Highly recommended.
And the recommendation is finished for most people; you can get dressed and go to the Palace of Arts to enjoy it.

But.
The world is much more spacious and the horizon is broader than we would think.
However, listening to the music there is a hitch somewhere... you have some weird and unexplainable feeling of discomfort.
Fine as it is but then what’s wrong?
Perhaps you find fault with Abbado, specialist of music of later times? It is hard to find out while listening to this record only - and I cannot make allegations that the approach is too romantic for it is not at all.

Let us try making a step backward and look at the year and mainly the map.
Rather, the real key is Naples. The city itself. 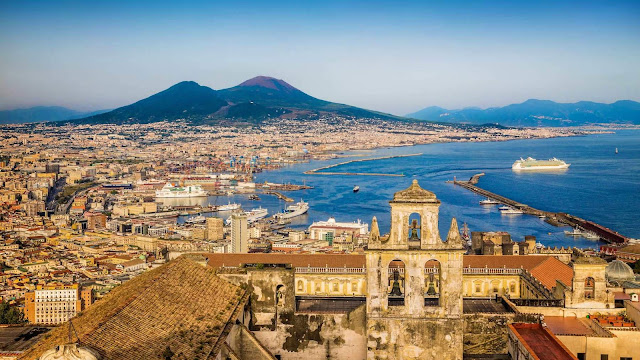 Where Pergolesi dwelled, where he opened the window in his room.
What is it like really?
It is not slow, not rolling and mainly not gentle.

Here comes in the second record. 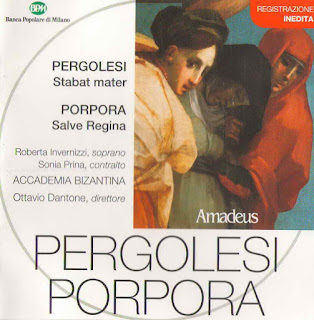 If you listen to the Dantone’s part you will see clearly what I mean.

Sunshine, glitter, the sea. No prettiness. The feast is of a different nature. The streets are filthy but the souls are brighter. Much brighter even before death at the age of 26. Drama is going on, the orchestra is not snappy but playing like Vesuvius ready to erupt. Rough. The bowers are barbarous at some places. Out of instinct. The tempo keeps being in a commotion and change. There is no romantic waving and sunset or a pretty dreaming look into the distance, instead, there is such a big tension that you willy-nilly seek for some shelter to save your bacon. 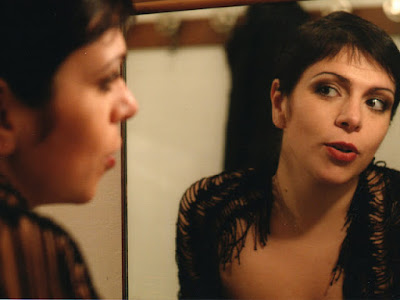 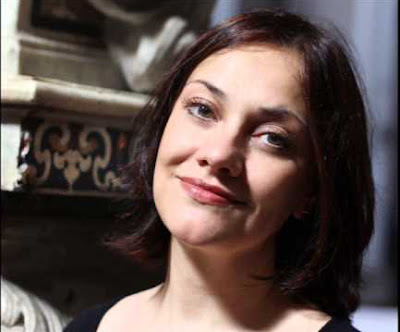 Sonja Prina and Roberta Invernizzi, alto and soprano geniuses from Milan, remember?, are singing strange way, which is rarely heard on records. They are hardly acting as real humans, slipping out from under the Catholic ceremonial gloss…what the South is really like.

As Don Corleone said in Godfather when he picked up a wet pebble and he broke it into two and showed that it was wet only in the outside but it remains what it is inside, it will never change; come what may Catholicism, religion or wars… 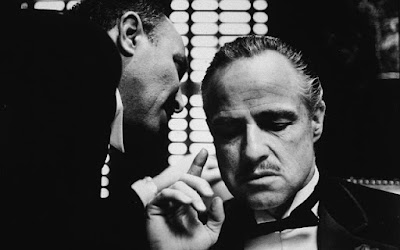 This flavour feels heavily in the record just like the procession in the streets of Naples; dirty kids barefoot, wearing snow white clothes, carrying Maria flags with genuine faith and pomp in their souls. 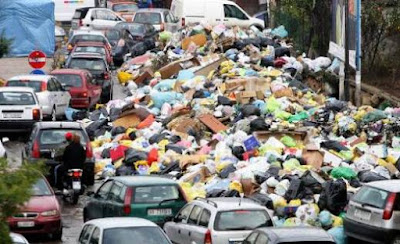 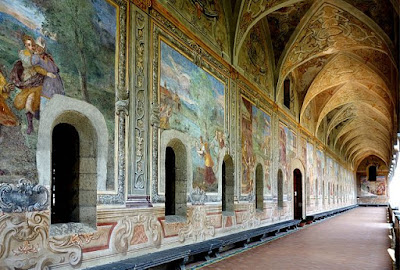 Some parts - the first track too - are heart-breaking at a higher volume.
The sound quality is gorgeous.

There are some who go on contemplation; they are not only interested in the ‘authentic performance’ but how this piece went on in Naples the time. 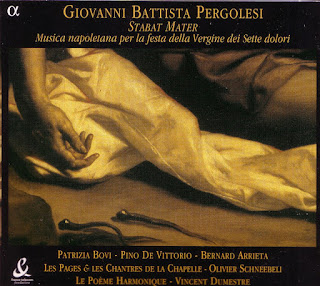 Believe me, Naples is an odd and unique place; for instance, the continual, never-ending sunshine all along the year, even the colours are different, that unbelievable filth and screw-up and the audience was far from Bach’s Abendmusik or Vivaldi’s Venice. Salve Regina got built on or rather in people’s souls indeed.
How? Well, as the ‘frame’ in the record into which Pergolesi’s piece fits.
Weird, isn’t it? A Tarantella between two Maria-adorations... however, it might have been played the same way in any church in the vicinity of Naples.

As Le Poeme Harmonique thinks it is an even more straightforward performance. The children choir part is like a fine membrane, it spreads out, magic practically comes true but the violins are rigid, almost wild.


The soloists are genial; direct sounds, they decorate if needed but there is no sentimentalism; (almost not nice...) sort of Abbado as they use vibrato, it would not fit here (albeit it is very nice) (is it…?)...
In other words, the audience in Naples would throw leftover from the fish and vegetable market at them...

It is so direct and straightforward and shouting at times that our beloved hifi-system must organize itself together so that the sound should not be steel-sharp. However, where the hi-fi miracle works there is not a dry eye in the house.
Seriously.

It touches something very deep which is beyond the category of nice/not nice.

One more time.
There are many friends of mine count Abbado’s version as a basic standard. I never argue with them for their taste is all right, very much, but I show these to them too...

Well, then, which is the winner?
All the three of them.
Deep inside everyone feels which one they need.