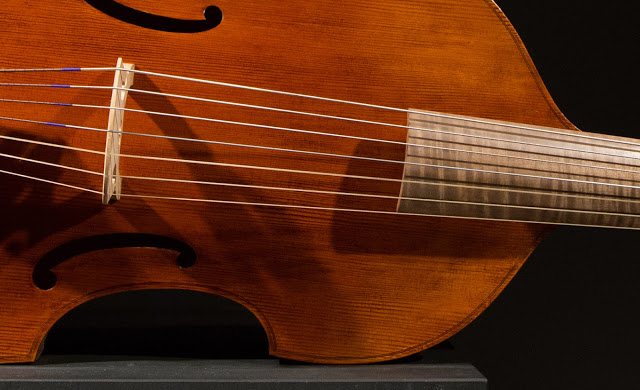 He is an incomparable phenomenon in Early Music.
Myth and legend are billowing around his figure. There is no portrait of him, although there are some paintings considered to be taken of him, but without any proof – by the way, most incomprehensibly we don’t even know his first name, and know hardly anything about his life.
He lived in a period, when baroque music was reaching its summit, in theorists’ terminology it was ripe or high; the opera as a genre became an absolute favourite, and at every corner immense, spectacular shows were arranged. The keyboard instruments were very much favoured, too, and from almost every noble house music was filtering through the air. 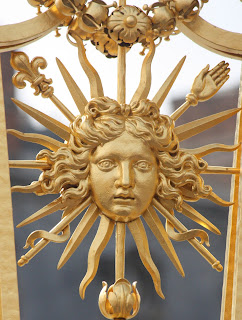 In France the power of le Roi-Soleil, the Sun King was on its zenith, the music of the time had become more and more complicated and over-ornamented, and its notions were beginning to be void of meaning; forms were enlarged, which actually means restricted; and virtuosity became a requisite without limitation. And this had been gone on and on, until, only a few decades after Sainte Colombe, Scarlatti (I mean Domenico, of course) came forward with much complicated keyboard sonatas I find simply unbearable, being impossible-to-listen-to thrashings, mere claptraps.

Sainte Colombe, however, was going against the stream so to speak: his unusually fine melodies are never empty – well, he always kept his standards very high indeed –, and his strange, somewhat unfamiliar harmonies are slowly eating their way into our insides, they are sober and beautiful, and sometimes very strange, often lacking any definable construction, but they are so melodic they remind me of Vivaldi, who decades later became another great master of beautiful melody-lines...

Sainte Colombe refused firmly to be a court-musician, instead he organised concerts at his home, playing excludingly with his two daughters, and these occasions soon became widely known and spoken of. The concerts were said to be very high in quality, and were even named “academic”. The master had a few pupils time to time, but he never kept them too long. 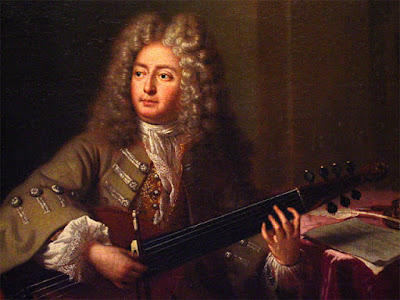 And there is that famous legend of the young Marin Marais, who, after having been thrown out on his ear by the old master, he cunningly used it to listen to the secret melodies, while lying under the shed in the garden where the Monsieur invented his beautiful lines, and made with them a glamorous carrier for himself, and for the viol, too, which instrument he helped to its summit in whole Europe.
Sainte Colombe was the one, by the way, who put a seventh string, a low A on the six-chords viola da gamba, and by doing so he did not simply made it possible to raise the number of new chords and fingerings considerably, but somehow enlarged the inner range or space of the sound as well. 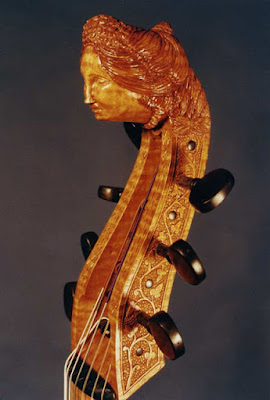 Every great performers of the viol honour his memory with a disc, the cult having been started by Jordi Savall and the music he used for the film Tous les matins du monde .
The film had exactly the same effect on students of music academies, as Top Gun on students of aviation – in the US everyone wanted to be an army pilot, in Europe they changed department and applied to become a viol player...

From then on this wonderful instrument has secured a safe place among both musicians and audience; and the cello fans are slowly overshadowed by the growing number of viol-admirers... 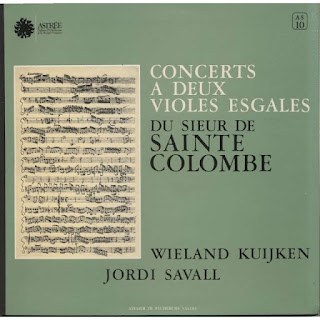 Savall did record this music with Astrée already in 1976, that time to LP, which became such a great success, it is now measured in gold at the jeweller’s scale. Later on, in 1992, a second disc was made, in this case in CD format, then in 2001 Alia Vox remastered and re-released both records on double SACD, in a nice boxed set and with a thick booklet.
What a pleasure, even to touch it! 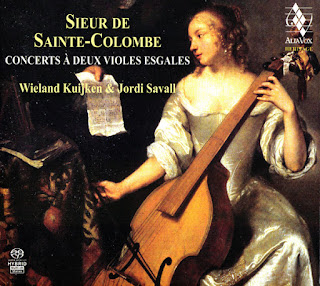 The music is simply awesome. Below is the first link... the whole disc begins with these brilliantly chasing sounds, and around the 30th seconds, in case you have a really very good system, you start sweating from exitement...

Now, a completely new generation of viol players have been raised since then, coming forth with smashingly good CD-s, and very soon even their children would take their first exams at the Schola Cantorum Basiliensis or some other early music department, but Savall, who successfully kept his place among the greatest gurus all the while, has set the bar so high, this is almost impossible to jump it over. Now, these pieces were written for two viols, and the other player is Wieland Kuijken, a Fleming from Belgium (Savall is a Catalan, remember?), but back then, in the 80’s, no one could have the remotest idea that these two guys would make a history, and not with their elegant jumpers...

When a piece of music is written for two parts, there is always hard to decide, who would play the first – and even if in Sainte Colombe’s music the parts are said to be equal, they are not really. One is always a bit higher than the other, or just comes first. It is quite difficult to persuade a great performer to play the second part, therefore there are a lot of recordings and live performances where equality between the two parts, even in a philosophical sense, is simply out of question.
Here, however, that time still absolutely equal aces sat down next to each other, and in order to avoid any debate, they constantly shifted between the two parts. 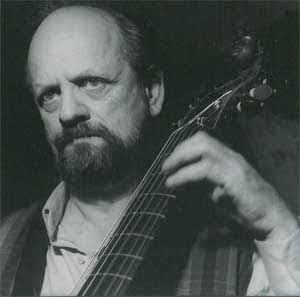 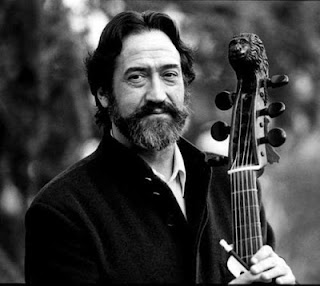 The music is not to be compared to any of its contemporaries; it’s melodic and sober, perhaps the most sober viol music ever, with a rather rigorous structure and strict rules, but at the same time with much inner freedom, that would only be seen centuries later in another system – or should we name it an anti-system? – which piteously must do without an audience, because they all ran away long ago... Here there are beautiful, richly resonant, low sounds; the seventh string bringing not only more chord-alternatives, but also a sort of “restructuring” of the musical playfield, transforming it to a multidimensional space. 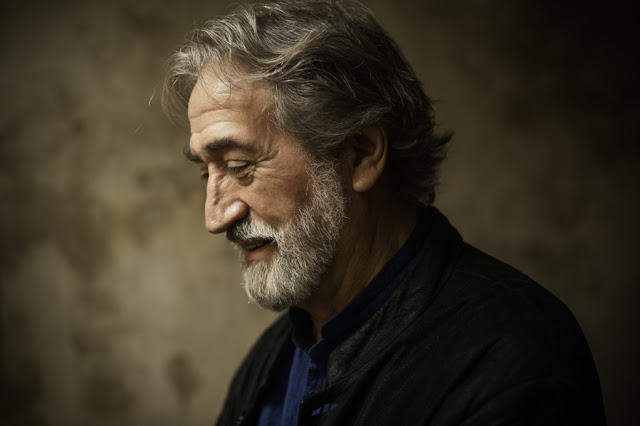 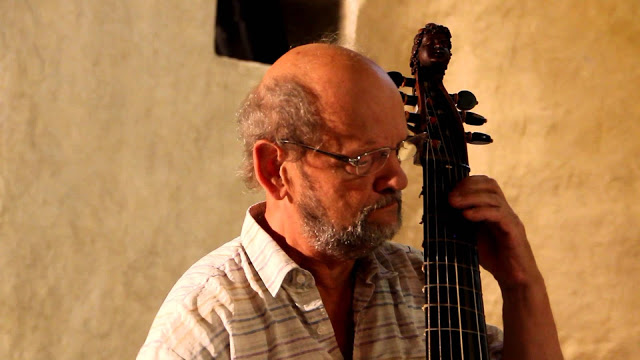 The movements bear titles referring to certain dances – it turns out soon, however, that sometimes even the time signature does not correspond with the actual titles; the dances follow each other in a rather unusual, almost inconsequential way, but instead of the ice-cold, deadly reasonability of the later sonata form, here one can feel the irresistible strength of wide, rolling waves of freedom, melodies coming forth like buds, opening in the morning breeze, and we are standing stunned, with half-opened eyelids, wondering how could such a rare beauty be born out of nowhere.

The timber is that of the Voix humaines, so very typical to the viol, and because there are now two viols playing, what we get here is a perfect musical dialogue, the range of which covers exactly the same spectrum as the human voice does, only the language is different, but it can be quite easily understood, so after a few listening we will have the feeling as if it had always belonged to us...

Both instruments were built long ago, one basse de viol at the beginning of the 18th century (Kuijken), the other around 1650 (Savall); both are equipped naturally with gut strings, and are possessing such a sonorous sound, we hardly even have the heart to listen to a baroque cello for weeks... 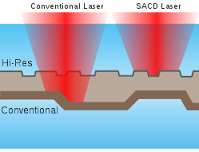 The quality of the sound is extraordinary. The first disc gives a little strange, knurly-raspy, old-tasting sound, but it is accompanied with such intensity and presence, that all those typical hifi-yammerings are immediately forgotten. The second is simply brilliant, so there is hardly anything to complain about.
The remasterings are exceptionally good, I couldn’t hear any difference between the layers of the old and the new release. If you accidentally have an access to a high-definition SACD-player and a HighEnd system, do not hesitate to listen to the SACD, because it is going to be an unforgettable experience! 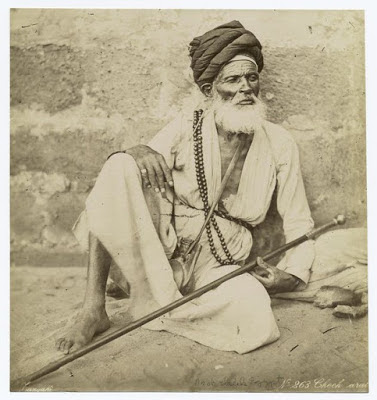 The music might seem to be somewhat sad... maybe it is... but sometimes the sadness turns into a flooding melancholy, which only raise the level of beauty, and we remember, don’t we, what the great Sufi, Ibn-al-Faradi from Cordoba said long ago:

Music is the sadness humans feel for their long lost home in heaven.

After the Reconquista both Cordoba and Granada became part of the Christian world again, but it seems this wonderful thought was still lingering there for a while, and then was absorbed by the woods used to build viols, gently and beautifully, and forever... 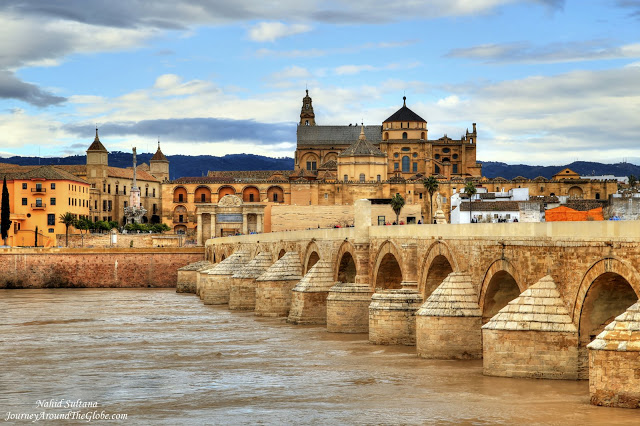