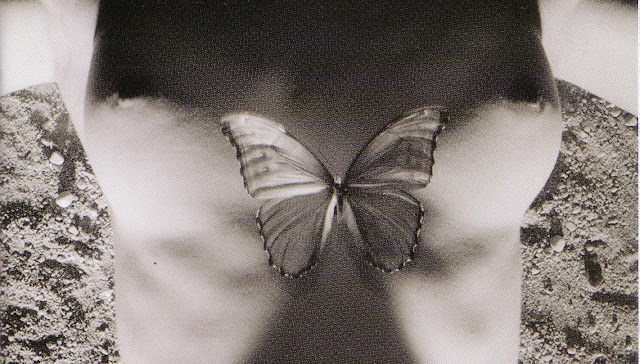 There is a record that has played a historical role in the art of playing lute music of the Baroque period. Here it gained little attention with few lute players recognizing it but not daring to play it yet, the reason for which may become clear from what follows below. 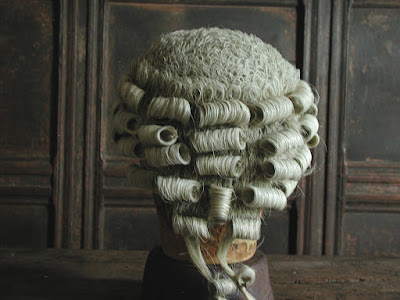 French Baroque in music stimulates the limits of our reception differently. Those superfluous ornamentations and rococo titivation, which when sprayed around by the instrumental groups in an opera by Lully appear somewhat superficial but nice and appealing, will grow into an unbearable act of thrashing around by the solo keyboard instruments 50 years later. 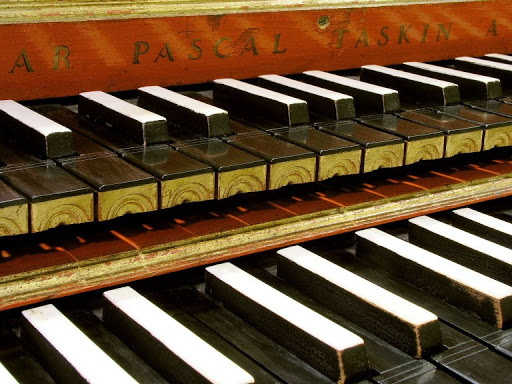 As there are simply too many sounds, especially two-manual ones: 10 fingers may well pick on 40-50 strings on instruments with several string rows at the same time and Scarlatti, for instance, was very much in favour of this pretentious insanity while he was driving  in total despair the flagged listener who, in his attempt to develop a liking of solo harpsichord music, is often in a hopeless struggle with his less sophisticated hifi system.

During this period for an unexplicable reason solo lute music turned towards depth and slight melancholy coupled with a bigger grip of the Baroque lute and its additional strings, thus spreading some exceptional beauty all over. Many suspect Dowland’s effect in this, his tears are still flowing after half a century…but we do not know for sure. 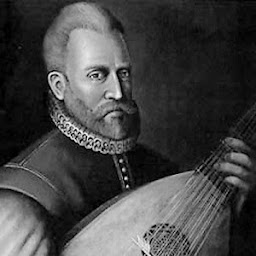 This whole thing is easily spoilt, of course, as  the parts are complicated and rich in ornamentation, too, thus they are remarkably difficult to play and the performance may easily become square: Youtube is well loaded with this kind of retarded recordings, a few of which are good but this record in particular is so outstanding of the whole mass that some consider it the best of all Baroque lute records. I can also add if anybody knows a better one, be happy to enjoy it and then show it to us, too… 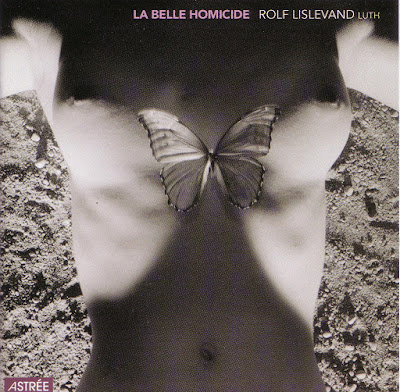 Imagine a pink colour record to the cover … what else can come??? 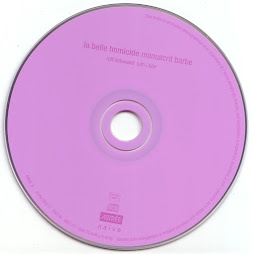 Rolf Lislevand is a great whizard, much has been said about him; he tends to do reorchestrations: Bach becomes fully ornamented to come back to life; Kapsberger gets some turns after which his jazz musician friends keep hugging him; Renaissance hits are interpreted in a way nobody recognizes them; but here there are no vagaries whatsoever – we take it dead seriously that everything is played according to the scores and if he at some points seems to be carried away by the decorations, this is only a little extra that has nothing to do with the very essence. 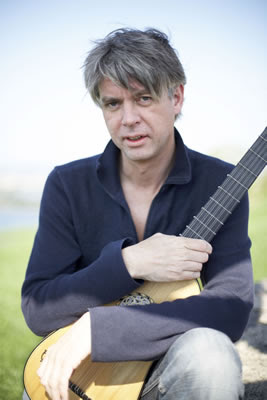 This all casts a nicer light on the pattern for us… Remember that in this age everything was precisely written down, every single trill and fake closure, hand position, as well as  exact rhythm instructions. Lislevand himself remarks that first he tried to understand music with his usual reactions, then he locked himself up together with his lute and a copy of the Barbe Manuscript to discover the meaning step by step and finally he completely changed his way of playing. 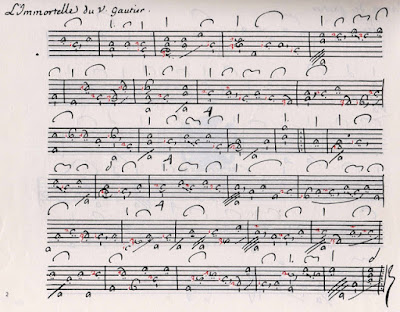 The composers are Gaultier, Mezangeau, Gallot Boquet and Mouton, the date is the second half of the 1600s.

Killing Beauty.
This is an effective title. Every man is aware that a certain level of female beauty is connected to such power that is almost impossible to survive if it bursts out. The musical performance is rather a sophisticated description of this phenomenon, although even Lislevand goes insane for around 10 seconds.

He says, though in vain, that these well-sounding titles were already myths at that time and with the following ornamentation he pays tribute to the cyclone emerging from the peaceful rhythm pattern:

Les Castagnettes – my great favourite; the series of waves and ligatures can almost be drawn on a bigger sheet of paper.

What is this performance like?
It’s ultra precise and smoothly rolling at the same time, having several layers like fractals, and why is this math stuff here again? Well, this is an appealing, fine performance for the first sight and a little later if we listen carefully, we’ll discover an interesting inner melody: the base harmony together with the ornamentation yield another kind of harmony, which can be further   intensified when we compare this second harmony to the basic one again … I usually do not recommend concentrated listening to music but this one is an exception now as so many different things may come out of the depth. 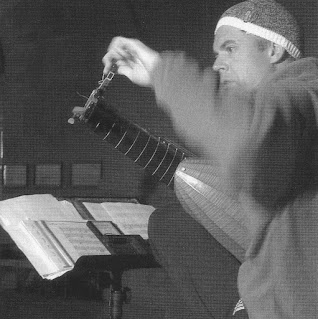 On top of all this, Lislevand  hands over some of these pieces as if they were  lovely poems accompanied by rhymes, rhythms, metalanguage and secret messages.

The last piece is a Double in Fis moll and it offers us something of real interest. We shall not notice it first as in the continuous flow a lot of different things drift in the same current side by side.  Words pop up in our mind such as mosaic or rather relayering in the same way as the tiles are  placed on the roof and the way we keep cards in our hand: one fourth of the King of Hearts is followed by one-third of the Seven of Spades; the theme begins, the rhythm is set, then everything turns towards the half of the Queen of Diamonds and a slice of Joker, but the structure remains intact since the fact that not everything is to be seen does not mean that anything is missing : the whole of the card pack is in play just in the same way as the musical ligature is present without a fracture. 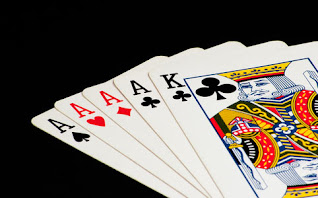 This latter is worth pondering about for a while as its significance goes deep and cannot be overemphasized: in fact, this is what makes this kind of music so enjoyable for us.
The lack of fracture means that the individual pieces fill the entire composition so that there are no slits anywhere and the small bits occupy the space completely without a hiatus. Mosaic was our first thought and rightly so for this very much resembles girih, the famous Arabian art of mosaic design in which five different types of shapes, rombuses, pentagons, hexagons and several other polygons with a strictly defined number of angles have been used for 800 years now to cover regular surfaces such as a rectangular floor or an unusual bird figure without a single gap or any tiles to be cut to form. 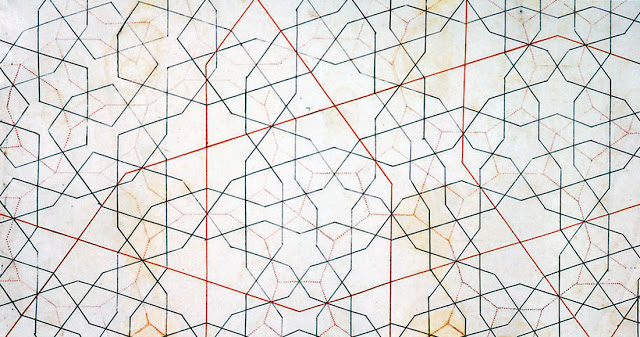 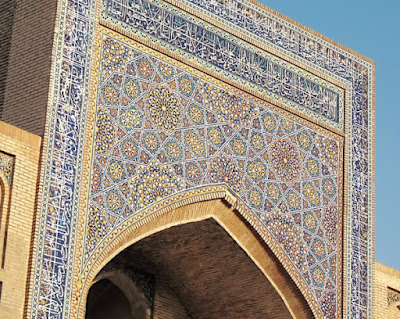 Is this difficult?
I guess it is as Penrose was able to lay the foundations of his mathematics in the 1960s in a very complicated manner, practically incomprehensible for laymen and even in 2007 there were fractal simulation experiments for simpler formulas, so far without any result. 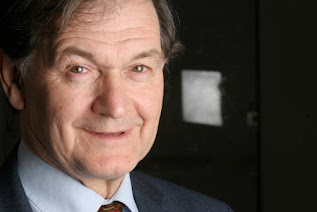 The recording quality is simply amazing; it has become a strong hifi reference record. It was recorded in a 12th century French cathedral during a couple of nights; forest and wild water life was fully on at the time, we can really hear everything: half of the Brehms lexicon is gaggling, grunting, stridulating, croaking and clattering here.

The sound engineer was just about to digitally snap these out, but in an appropriate moment Lislevand suggested that all these should remain because if this was part of the circumstances then why should they lie … and in some cases they even got amplified to make the base choir parts  more audible… 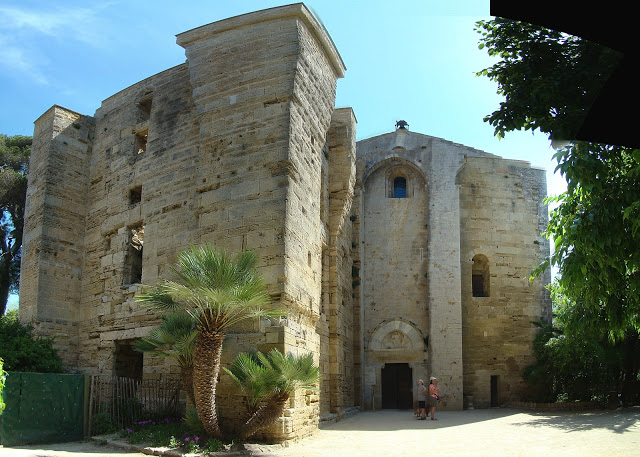 The tone is marvellous; string selection was like training a whole ballet group; the performance is extremely sensitive though at some more complicated points the 11 choir Baroque lute gets such a grip that it cracks …

We also get this grip in some other way though somewhere inside; our sense of taste is gently but firmly directed as he opens a window and we can look out and listen to the frogs while making comparisons; we can feel happy and sad or even forget about everything else.


It is definitely recommended.