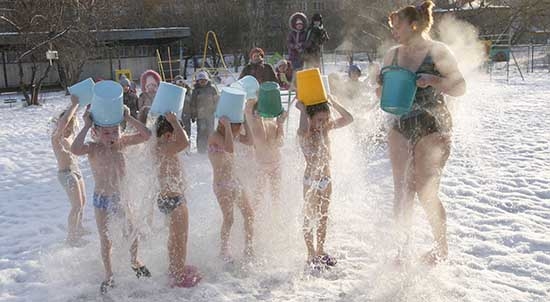 Now let us see an older disc that was several times recommended by many sources – including this blog. However, no full article was published about it so far.

This disc simply opens a new era.
It starts something that is copied further by many performers. It has thrown something into the water and the waves are still in progress. 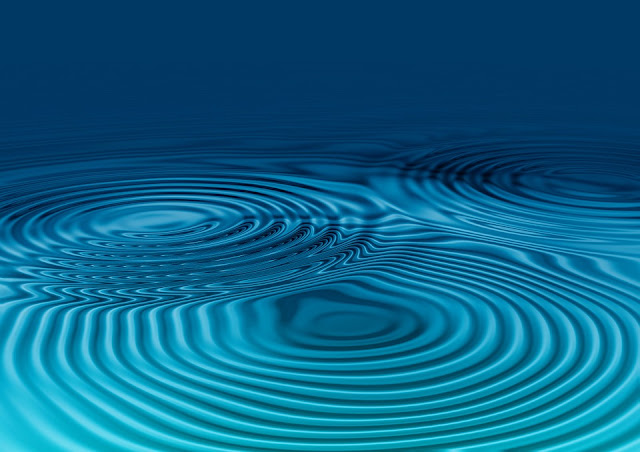 La Folia.
If you are good in English, you might immediately associate to ‘folie’ or ‘folly’.

There were many odd happenings in the 15th century which were never published in the chronicles, mostly due to the censorship of the Church. There were some melodies that caused a strange and mysterious anxiety in the people and they were unable to stop dancing after hearing it. Complete villages went crazy: they started to go around dancing not even knowing where they are heading. They grouped into dirty and wild hoards and started wondering around lead by a mysterious force. It took a few weeks before they ended up as victims of burglars or illnesses. Based on the quite inappropriate codices of the time, science describes this phenomenon as ‘dance epidemic’ or ‘dance tantrum’ but there are only vogue guesses about what could cause it. The explanation can be either mass psychosis or a ‘proper’ epidemic spread by a specific germ similar to the plague – nobody knows.

There is not enough information from that era, in which half of the population could easily be erased by a deadly disease. 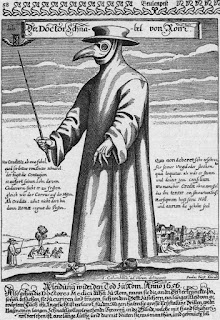 The Church chose the only possible solution: they forbade playing those melodies by listing them among the infamous Forbidden Dances of the time. Later the prohibition became less strict, the problematic era came to an end and the issue gradually went into oblivion.

Most of these melodies are lost. Only two of them survived, hidden in folk music: one of them is the Italian Tarantella and the other one is the Iberian La Folia. 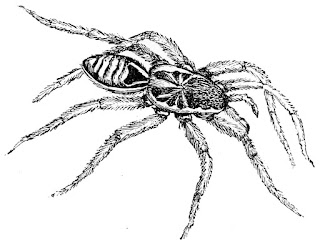 The Folia is considered to be of Portuguese origin but nobody is really sure about it. It was first noted down at the end of the 15th century. Then this melody has marched through music history in the form of several transcripts and adaptations.

It was part of the curriculum of musical studies during the baroque era and the number of possible variations is even multiplied due to the fact that this melody is also an ostinato, a bass base.

At first it is very charming.
Why?
Because it is very melodic, very harmonic, even to the point that it is a bit too harmonic, too perfect. This is certainly an anchor at the area that we call the musical collective unconscious. Humans have always been driven towards melody throughout the centuries. However, there were composers, who disdained it orcompletely left it out from their works. Or those, who were simply incapable of creating it (J. S. Bach) [the translator of this article disagrees].
Nowadays the intensive presence of low quality music devalues this important part of the musical thinking, but the drive for melody is still present as a basic human quality.

For the second though, Folia is not as innocent as we would first think. This melody is highly invasive, i.e. it discretely but very aggressively settles in the mind and sinks down into the unconscious. We gradually lose control over it and its further actions are unpredictable.

At the later Folias in the good performances an interesting divergence can be noticed: the slow parts are getting slower and eventually the music stops, even a few seconds of pause can be inserted into this originally fast music, while the fast parts on the contrary get faster and faster, so much that they can escalate into complete madness. 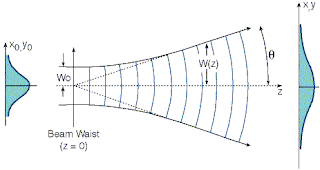 Savall himself said that this dance was unstoppable as well as playing this music. Even a bucket of cold water could not help ending such outbreaks in the not so distant Portugal. 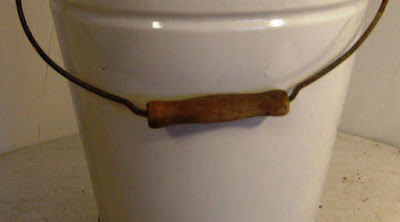 Indeed, when listening to this music from the disc the endings are always a bit forcedas the musicians have to exit this madhouse somehow.

The other question is why these seemingly innocent chords cause such a chaos in the human psyche, but this could be the subject of a different, scientific essay. 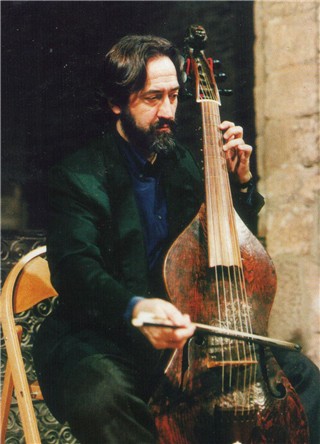 Savall has been obsessed with Folia from the beginning; he made this melody popular in contemporary Early Music and published four famous discs on this theme. 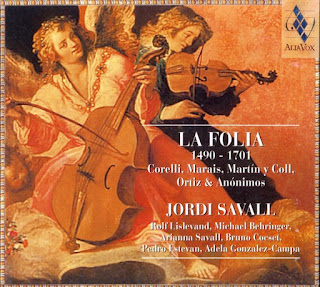 The first one is solely focusing on Folia. It starts at the beginning and proceeds to late Baroque. The Zanetti viol  is one of the instruments he is playing on this recording. The other one is an original, six-string instrument from 1550; this one has a special, slightly pale, flat, wooden tone, this is one of the most beautiful voice of viola da gamba that we can find on recording. Savall is creating several unbelievable series of sounds, but sometimes even a simple chord can touch us very deeply. He is virtuoso, extremely precise, using decorations; he is emotional but never pathetic. And beyond those there is a delicate, undefinable element for which we have to say that this music is genius.

We insert the disc.
The first track.
The first sound.
The sound of a tambourine. And it is strange right from the beginning, as the rhythm is very precise but it is not where we expect it. He is keeping it between the base rhythm of 4/6 and 5/6. You can try to follow it… but you might not make it for the first try.

This is an early Folia, its sung version is known as Rodrigo Martinez. The music and the series of variations provoked very serious explanations but the lyrics are very simple, we can even say dull. More or less the song is about Rodrigo, who is a cool guy, about the way he is steering the geese and later he thinks they are cows instead, hey…

The organ-player monk Martin y Coll got infected too, around 1700.
And at the end Corelli and Vivaldi, who also went crazy from this melody.

In the first four tracks next to Savall the continuo is played by Behringer (keyboard), Lislevand (lute), Pedro Estevan (percussion). Such a magical harmony is very rare. The late folias are mostly performed by Manfredo Kraemer and what he does on the violin is being copied by many even now.

The sound quality is extremly good. The original version from 1999 by Alia Vox is among the first editions; it was republished at least three times already, now available on SACD.
On HighEnd sets this has a very hypnotic effect. 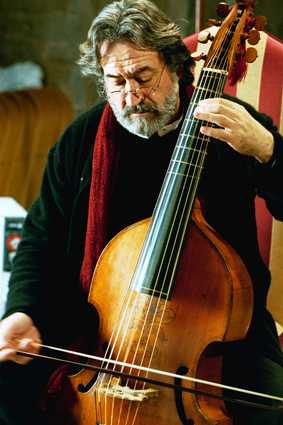 The mantra-like repetition of a Renaissance ostinato can evoke very interesting impressions. Funnily enough, it can easily be connected to the contemporary technique of  loop used in pop-music. While the latter can sometimes prove to bea piece of rubbish, sometimes it can be something very delicate. We shouldn’t underestimate this effect; the story is never so simple.

This disc is a very good example of something that many people still don’t understand. They ask: So is this music about a few chords that are being repeated for several minutes? Is that all? There is no counterpoint; the fugue technique, which could be on an artistic level here, is not even represented. So it is like a renaissance dance, one step to the right, another one to the left, not very special but the dresses are nice, at least. 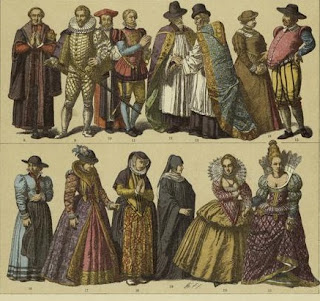 This approach was so destructive that we had to wait until these days to finally hear those renaissance pieces and folias played by such musicians who think in a different way then above. Finally they create something similar to this recording. And therefore we can start to think differently about these pieces as well.

But how can we?

We might think that indeed, these pieces are extremely melodic.
Or that they are intellectually exciting.
That they are disturbing. 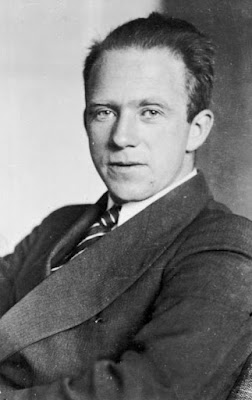 That Heisenberg was right, the weight is and has always been in the progress of definition.
As there are not even two chords on this disc that sound the same.

Because it moves us from the inside.

Because we completely and deeply understand Odysseus, who is already at home, well rested, with a freshly cut beard walking on the market, rummaging around tomato and date, looking at beautiful women and is always thinking about the music he heard far away on the sea, while he was tied to the mast… 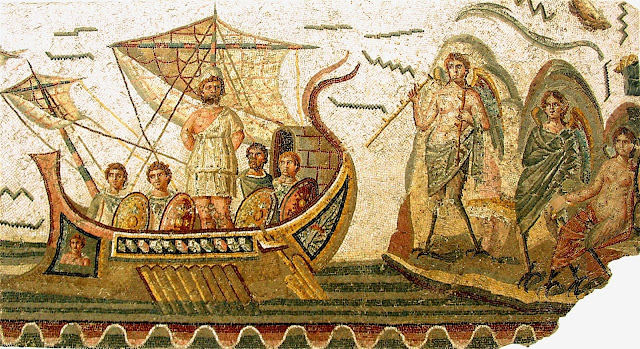 While listening to the several delicately different variations we start to understand that the nature of the world can be described by differences, not by opposites. All similar entities differ and all differences are similar to one another, but in a way that similarities never fully overlap each other and the differences never become absolute opposites. 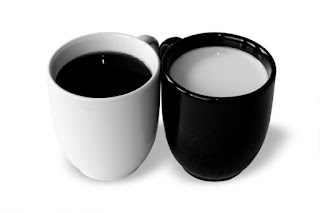 We have the chance to learn to hear differences in music, we, who are mainly thinking in counterpoints and bipolar opposites.

No problem.
It is a great entrance for Early Music. 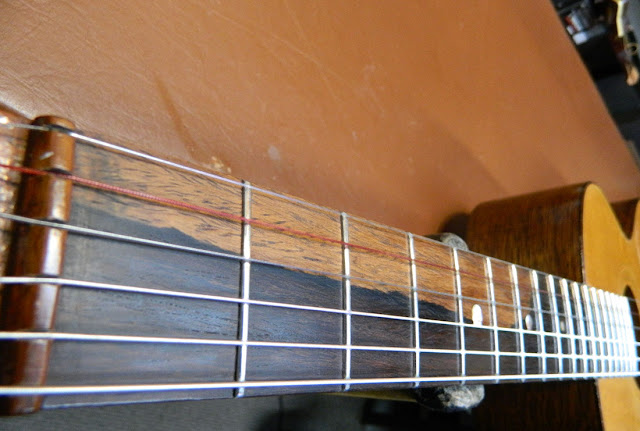