A friend of mine is in far-away Granada. We had an idea - he travels there and I take a journey here and then we talk about our experiences… 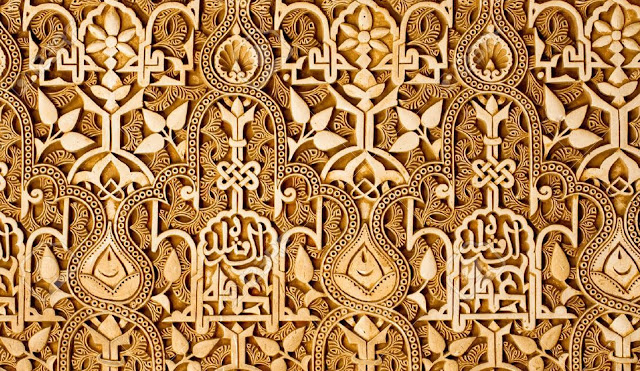 Alhambra.
It is a fort in the north of Granada. There are a lot of data about it, Wikipedia and other encyclopaedias deal with it in detail. Looking into the topic more thoroughly it turns out that the provided information is only superficial phrases raised into canon by the academies and scientific societies.

As blur and disorder are simply astonishing. We come to a standstill even at the name because the favoured formula, the Arabic 'al-hamra', red fort is to our liking; problem is that nothing is and has ever been red here. Neither the sand nor the setting Sun. 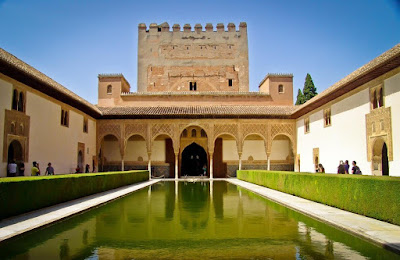 The north-east siting is unusual, to say the least.
Who was it built by? Well, a dozen names are still debated, also, what grounds it is built on if there was anything before it. No written history remained about the construction despite the fact that it lasted for decades. Then each significant ruler built in something, which makes the whole thing chaotic. Is it a fort at all? It has little strategic significance in the old times. Military-wise, it was completely unsuitable for a fort because it was full of private residences, baths and luxurious apartments by the wall. 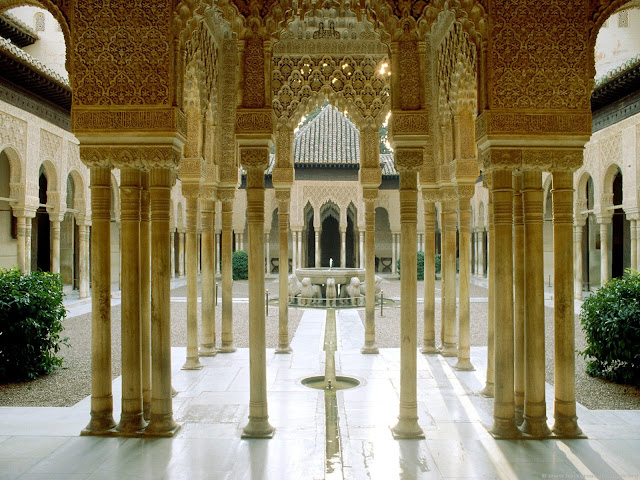 It was full of so many ornaments that you are so much struck by the beauty that you think it makes you dizzy and feel to be drugged by the walls, pillars, floors and canopies, the decoration breathtakingly finely carved that the tiles and walls and the inexhaustible infinities of hoof arcs and stalactite domes glitter at you…

The labyrinth protected by 27 towers is too much of a fort to be a palace, where you are definitely lost due to the near right angles. 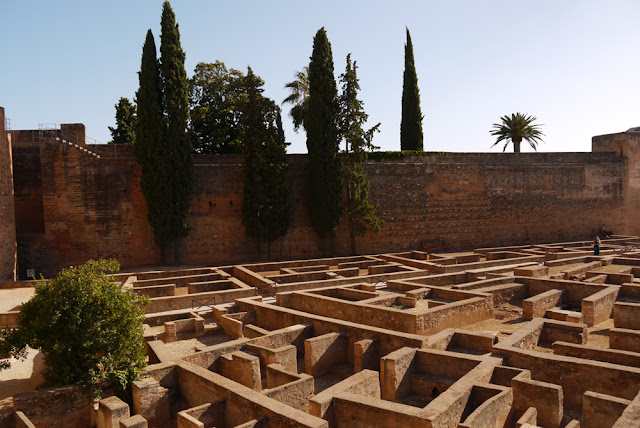 Alhambra does not show any construction method; architecturally it is rather a collection of question marks so there is no right way inside, not even a way to follow because the patios and rooms are not connected as expected. As if they were to themselves as Alhambra is to itself, it does not tolerate any fitting into a system. 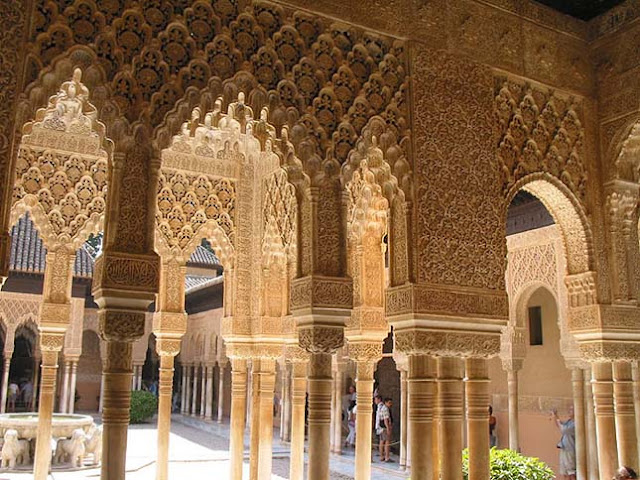 The enlaces and whirls of asymmetric decorations are included in several books, the impossibly precise backfill of girih made generations of mathematicians sweat, today’s space technology super computers take seconds trying to solve this problem. 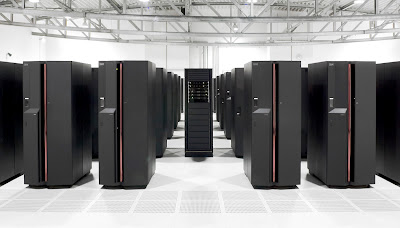 Then come the many historical facts.
For example, when Granada fell in 1492, the Moriscos were ousted for good, the Christian Kings arrived and Reconquista was completed. 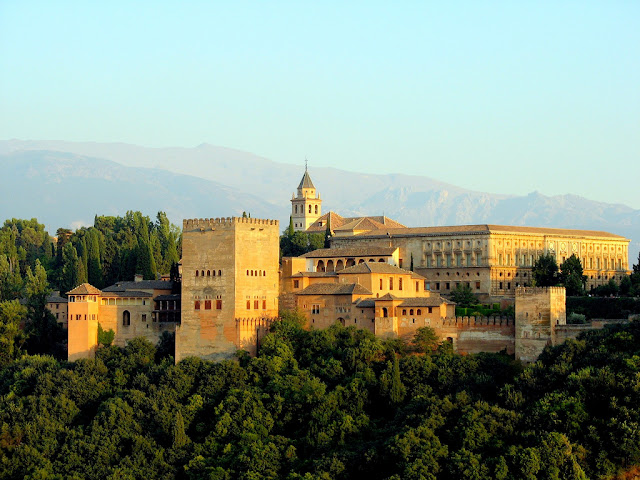 Alhambra has stood on the hill solitary since then for it was not destroyed, it is the culmination of Arabic culture and ornaments, however, without Arabs so its secrets will never be revealed.

…it will survive illuminated, solitary, infinite, in perfect standstill with its valuable volumes, useless, incorruptible, secretly.

Done so and you are still interested, you should turn to something that does not explain away, does not tell the truth, does not say what is uniquely infallible, yet, gives an answer from inside.
Yes, music. Like so many times. 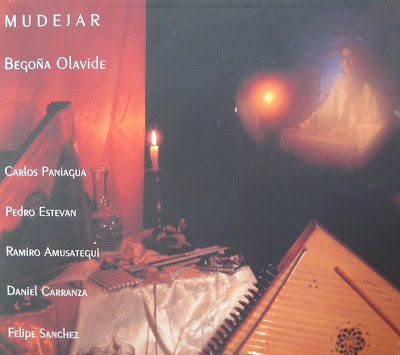 Iberian early music is special owing to the Arabic influence. It works in the same way as in astrology, or in genetics for the realists. In the amalgamation of two strong things like Arabic and Spanish (Renaissance) music there is no equalisation, no lukewarm water. No bluish-brown eyes. The dominant feature will not get a conformist effect so a not-so-dominant feature - does not exist.
Nope. 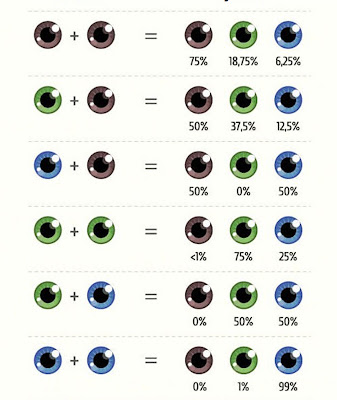 Complex recombination, latent oddities turning up after many generations, children with bright blue eyes appearing inexplicably, postmen and pizza delivery boys blushing innocently, a mass of complicated oscillations. The increase of complexity can be felt and heard. 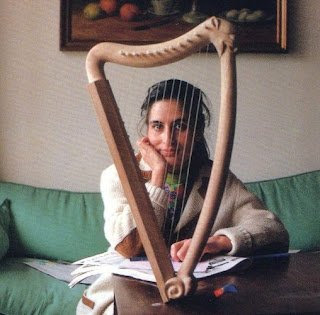 Begona Olavide.
The name means psaltery.
She is a genuine expert, she plays and teaches numerous versions of it. 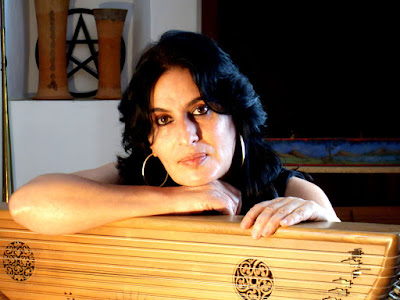 An instrument whose last heyday was in the 1300s. Is it an archaistic, antique-like, obsolete weird instrument defined in the encyclopaedia in 10 lines and that is all? The story is not that simple. A French psaltery fan, Marin Mersenne wrote exactly one thousand words in Harmonia Universell in 1635, the story is there, the instrument inside and outside, strings, tuning, playing, in a word, everything that counts. Its followers, not even few, keep it alive creating a nice tradition in music again.
The Hungarian reference? A delightful oasis in the Early Music makes us happy with fantastic performances sometimes. Emese Tóth expert is a singer too and plays the instrument so beautifully that you are happy once you can hear it…

Begona plays music in Paniagua circle in this record, they are one of the centres in Early Music in Spain of which there are many. What a place it can be…hard to imagine from here. 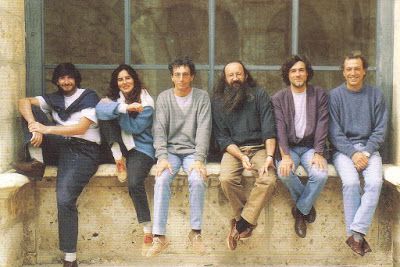 Mudejar.
The Muslims who did not convert to Catholicism after the defeat. On the contrary, they stayed there and went on keeping Allah’s sacred faith.
What an upright thing it was.

The repertoire is nicely familiar, the Iberian hits of the Renaissance; the lightsome feeling lasts until the record starts. It is something different. Somewhat more. We can recognise the Portuguese Folia even from its first two accords, give me a guitar, I can pluck the melody by hearing it. Is it pleasant?
Well, things went far at this point. 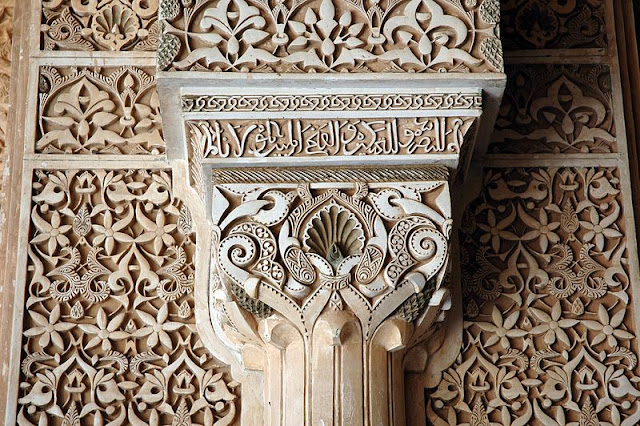 The column cap ornaments of Alhambra stay on the sounds; the infinite and aperiodic maze of Arabesque; we remember, don’t we that Pythagoras had his student beheaded who put the question about these weird kind of numbers? They are still called irrational numbers because they exist and do not exist, literally, no beginning or end, fictive existence, yet, it can be depicted any time. My friend is wandering in the palace at the moment is a mathematician; I simply cannot understand how he can comprehend this canonised madness in the door reliefs of Alhambra, in the variants of Las Vacas and in the functions of modern fractal analysis. And two radical in the diagonal of the square when it turns into a triangle, which is, by the way, completely impossible…

Luckily, the instruments do not know about it, they count the incalculable according to some other upper relation and show something that cannot be presented.

Pasebase el Rey Moro – the song is about the fall of Granada from the point of view of the Arabs.
“Christian champions” say the lyrics.
What a nice respect of the deadly enemy… 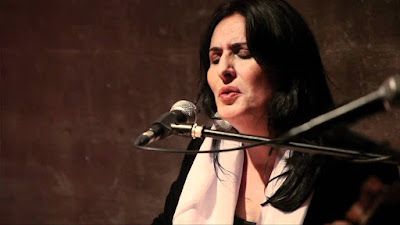 Begona’s voice fully fits in the metaphysics of Alhambra. It can be fitted into a frame. Exactly as a girih works. There is no any broken tile needed to fill the complicated bird-shaped area.

What is it like? Sweet, fascinating and moving but firm as the slash of a sword, commanding, tells a story, begs, prays and invokes with deep dark colours. Those ornamentations in her voice …they simply do not leave me in peace.
Almost frightening.

And then we get a bottle of fine wine and my friend tells me about Alhambra.
I look forward to it.
Here is the record until then.