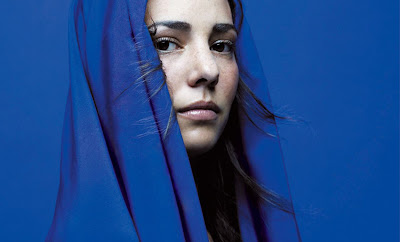 There are records you cannot write about enough. If you do not know them I recommend buying or downloading and listening to them; if you have already, listen to them again to see what is going on in music life, say, Vivaldi, our hi-fi or Venice and most of all ourselves. I am always taken aback by what I hear, I mean especially the voice of singers.

Vivaldi in Blue, as it went down in history of records, a Naive in 2005 stands out of and fits in the Vivaldi series. 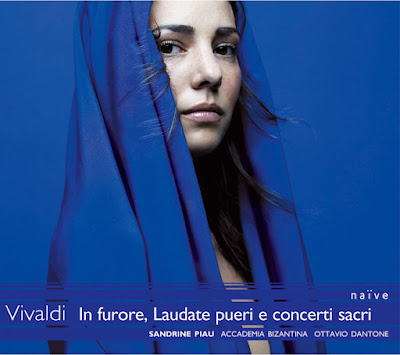 You do remember the publisher’s daring idea of releasing 100 records from the archives in Turin in 10 years, don’t you? You also remember the artwork which presented the series with its extravagance and unique appearance.

It is worth starting with the cover because it features the whole record. It looks the same as outside and musical-inside.
What is it like?
Well, it is blue with all sorts of hues. The back is lilac-blue. It is not cold or sad blue but Mediterranean. Sunshine blue.
Madonna blue. 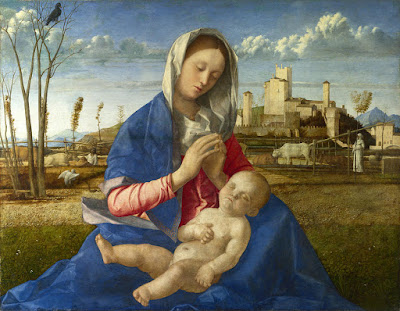 Blue because we are in Italy and because there are motets in the record. But it is some outfit or robe or what. Some sand mingled among the cogwheels of the conventional and exalted Maria analogies… her hair hangs out apparently with deliberate intention… and she is a turtle, far too good… as a man I can hardly stand her look without underlying thoughts. Her look is not that of an aghast Madonna for she may say that today is not OK but come tomorrow, I am waiting for you, indeed...
It is called semi-motet because it is profane musically too, as a coloratura aria and a Gregorian are not a group. So seeing such versatileness one single town must be thought of, namely the delightfully nefarious Venice. 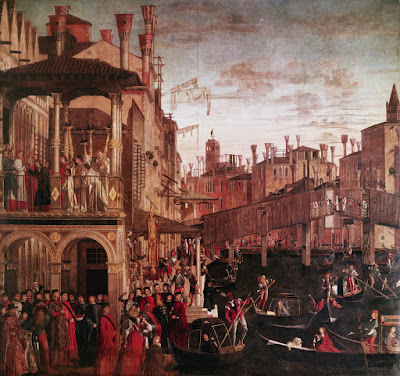 The streets are made of water and the inhabitants go after their business in boats in Venice.
Loads of elegant palaces come one after the other; a novel aesthetic category is borne.
Casanova lived here who truly loved all his women one-by-one, one after the other and at the same time. 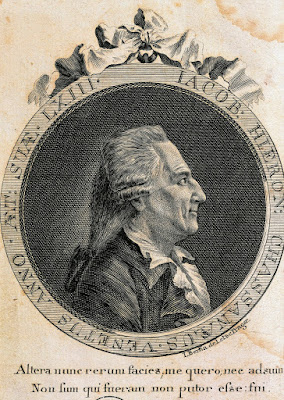 The ill-famed Leads prison was in Venice where Casanova fled from and made a pass at the gendarme’s wife who hardly had closed the door behind her husband who set off to search for the swashbuckler at large.
There were ten thousand courtesans per 120 thousand inhabitants in 1620.
The sea washes the pedestal among the millions of bollards day by day keeping the town clean from underneath, the chime in the churches, confessions, prayers and candlelight ensure the spiritual hygiene from above. 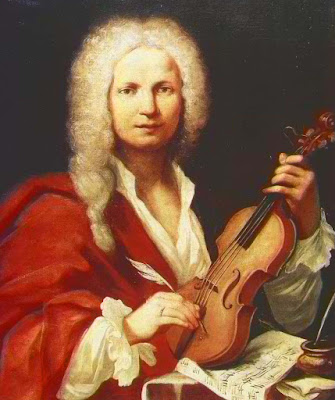 And, of course, Antonio Vivaldi was born and composed in Venice. He got a seedy girls’ seminary which was rather an orphanage. 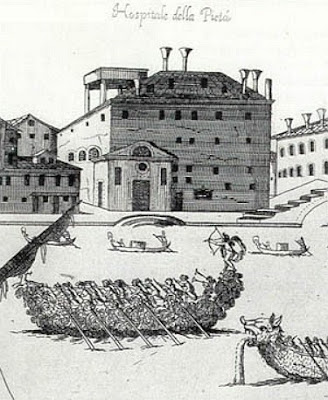 After few years he created a quality orchestra and company with the lassies and they were extremly popular with the high society. 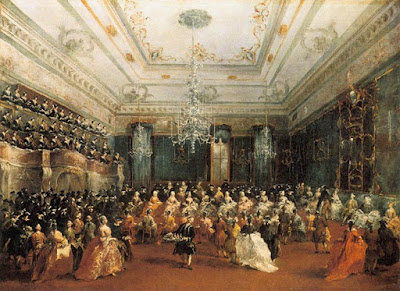 The men’s roles were sung by the girls wearing wooden grill masks, the audience threw candle ends when the performance was to their liking, everybody ate shrimps and almonds and Vivaldi played the violin as an encore when he was in such mood.
I think I feel this mood all along listening to the record. 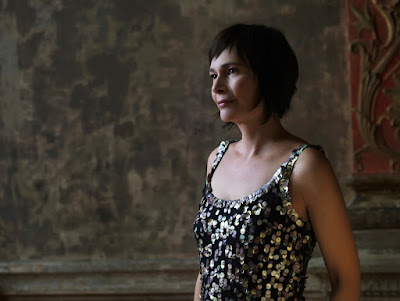 Sandrine Piau, French sopranist from William Christie’s brood. Extraordinary voice. Colourful, full of emotions and very precise. The latter is striking as the excessively stilted arias are like complicated obstacle tracks or winding staircases in a fabulous baroque building. We look at her picture and believe the whole story we hear. It sounds so well and comes so close that we start understanding what she really thought of Vivaldi 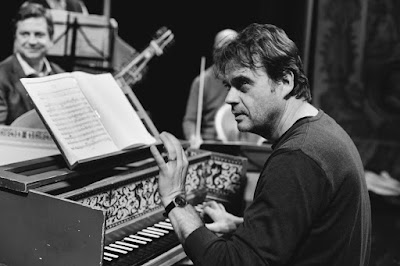 Ottavio Dantone is giving the continuo on cembalo at the background. The whole performance is his idea. Sandrine thanked him for writing the ornamentation in a booklet. Yes, he did it, it is not included in the notes; the notes allow and even demand it in Early Music.

A sound as a start ascending up in the skies.
In reality the sound descends from the skies as it is the Divine Wrath rolling down around 1720 because of the sins of mankind in unison with chromatic horror.

Sandrine said that it is a good aria, it provides a broad space for soprano; she must battle with herself mainly...
Then a short invocation and a slow movement, a serious deprecation for pardon to the Saviour, untempering his heart, Alleluia in the end, it seems to be successful, the gondolas may go on, red dresses are preferred, much gold and cash are recommended.
That scream at the end is quite fine...

Ahead on Canale Grande into the labyrinth. What did László Krasznahorkai say?
We do not understand beauty any more so we are searching in a maze strenuously which is the place of our being lost where you can have one aim only, to understand the structure of this error. 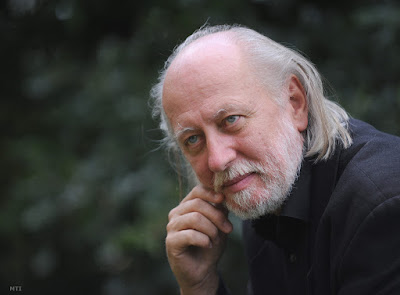 Beauty-labyrinth. He also said that the highest spiritual order of a civilisation is created and vitalised by the Perfect Beauty.

These lines sound out-of-the-common in Venice where there are no roads, no pavements and no electric pylons. Venice is a 600-800 year-old print left here with an aesthetic culture entirely vanished by today, but, no, we are here, we can see it, walk and live here, no matter how many tourists are around, they cannot maculate the beauty of the palaces. When we leave the exhibition of the Biennale where flooey architectural solutions disturb the pace of the planets, we hug the panorama of Rialto and are grateful that it is not damaged by architect celebrities.
A fine aura or rather vapour enfolds us as we take a deep breath. What a town is this with such a fish market? 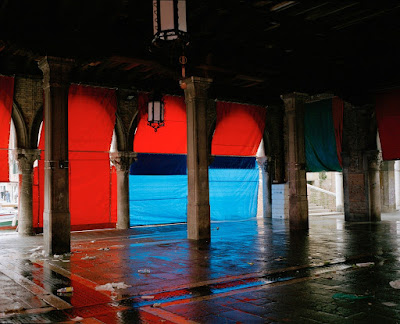 And entering the hospital we can see such things on the stones Vivaldi treaded…?
How can a hospital look like this? 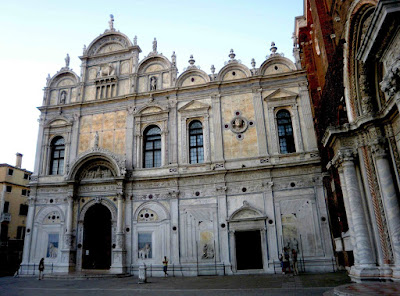 The door-keeper is behind the entrance, then a corridor leads to the reception desk. Perhaps that we can relax and forget that it is not a museum but a hospital. 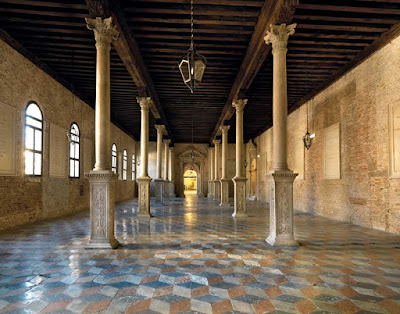 Laudati Pueri was composed by a Psalm No. 112. around 1730, originally to castrato but there were soprano performances at the time of Vivaldi.

Long trills on the syllables of eternity, the ascending melody is the victory of the Sun over the Night, the instrumentation contrast presents the opposition of Heaven and Earth, the saving and glorifying halo is the famous Gloria, the flute-flageolet soaring to the skies incomprehensibly overtaken by the singing voice - the direction in the video is horizontal where the BMW speeds up - otherwise the story is exactly the same.

The orchestra is playing straight in unity, no subservience even when the sound of the violins adds up to a whining choir.

In a word, Vivaldi.
It is also Vivaldi.
More exactly, it is Vivaldi.
It is recommended in all packages and quantities; even the Four Seasons but Il Furore even more; on expensive HighEnd stuff, on small system, at home, outside, in the car, in the locomotive, during roller-skating, in the outer space, in the copper mine, anywhere; it is worth setting up a hi-fi maze for this record. 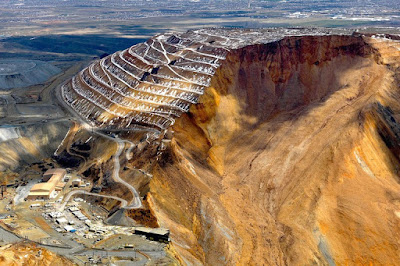 Venice, August 2016
Opposite the façade of Casa Casanova with the lagoon between us sitting at a 600-year-old window.