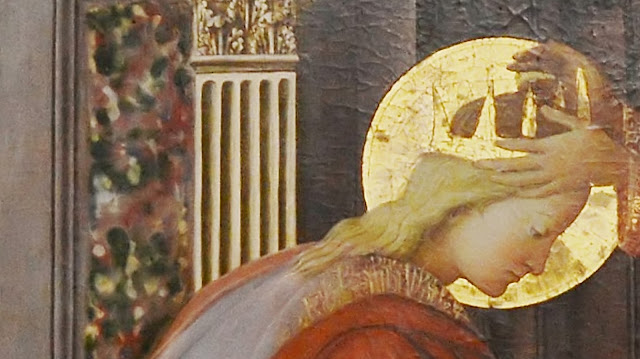 Monteverdi…
Unignorable, an absolute must in early music - although this statement is perhaps too academic, representing rather a musicologist's point of view.
So, what could nowadays be a true reason to take a liking to Vespro? The answer might be but a couple of random thoughts, different for every single listener, diverging neccesarily and at a great angle from the objective line of textbooks and data on the net. 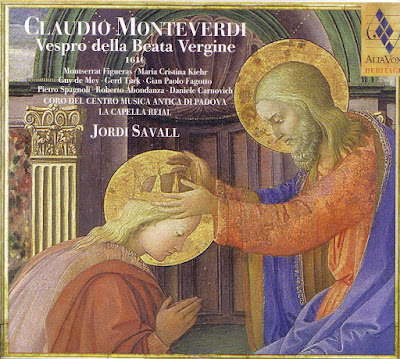 It is a church music, therefore, according to the rules of the era, rather conventional in its structure. And this is very important, being true not only for the frames, but also for the "stuffings". And even if we can no more understand the old system, having become outsiders in the meantime, and we no longer know what comes next and why, in a strange way it does not affect the quintessence of the piece, at least not significantly.

Sublimeness and solemnity - these two features take hold of us immediately. By the way, how nicely a methaphysical aspect is expressed by latin sublime, meaning literally "up to the lintel"! 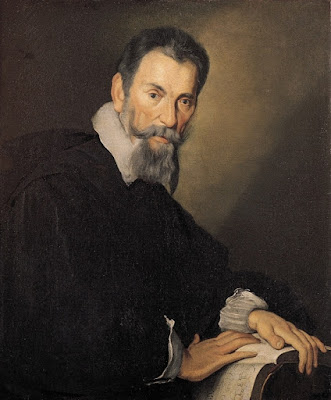 Looking into it a little deeper, an impressive framework is unravelling slowly before our eyes. The vespers with all the psalms, the Magnificat's paean, all rooted in the Holy Bible, are at least as complicated, as the tools of the musical expression: the intro, the use of soloists and the choir, and the way the different keys follow each other, develop into a grandiose service following a multitude of rules, which were that time parts of a familiar and fluently spoken musical language that in our time can only be unfolded by real experts. Don't worry though – the heart of contemporary people opens with the same little key it opened 400 years ago.

The introduction might be familiar from the Orfeo – fanfare-like, a little too harsh perhaps, but attention-drawing, as if advertising a circus, and somewhat alarming for sensitive souls, who maybe think: God, would it be the same all over? Well, it is just the ad, no reason to worry, no need to run away. After the intro comes an antiphone, an ancient gregorian chant, conducting the way to the next movement, and it goes on like this, and since the complexity of structure is fortunately overpowered by a strong feeling of unity, from then on we are being amazed again and again.
As for the music itself, is is thoroughly fantastic, and in the interpretation there can be felt a breathtaking emotional tension.

Something far from being usual. The orchestra is naturally playing perfectly well, they are simply doing their job so to speak, but there is an elusive, tender thrill coming from somewhere inside. Seemingly capricious micro-wawes. The voices are great, even genious, but there is much more in them, than that. Something strange, almost queer. The voice of Montserrat Figueras is pulsing lightly in the lower register, a voice that is otherwise as steady as a rock, here is quavering a little bit, yes, trembling, as if she would stand at the age of twenty in front of an ultra-rigorous audition jury. Well, it's something, under whose influence we slowly begin to get numbed. What the earth is happening here? The choir is singing so wonderfully, that our souls begin spiralling, somewhere upwards... 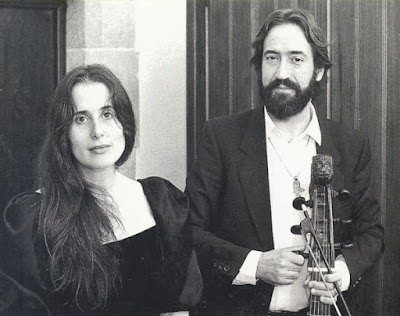 Then, later on, things become clearer.
For this is very early baroque, rooted deeply in the musical tradition of the renaissance, therefore there is no such things here as over-emotional, quavering vibratos, common only in romanticism much later, no tears and sniffling-crying-snivelling, accompanied by touchingly sad puppy-eyes, neither the egoist „me-me-me”, my faith, my emotions, my problem, my psychoanalyst…

No, the quintessence is coming from above, and not from inside, singers being nothing more than mediums here. 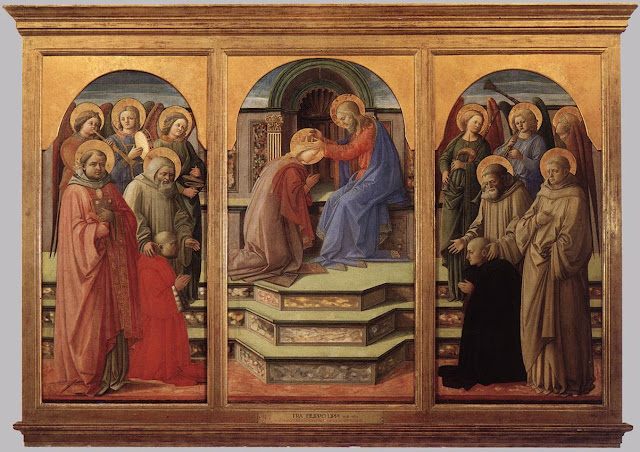 However, they are naturally humans, full of real feelings. And still... they must have got a little crazy from this kind of music, because they came to Italy from far away Catalonia, to this church named Santa Barbara; jolting-wobbling there with much toil, to he place where the Vespro was first performed, just because this bearded chap, this Jordi got the idea to honour Maestro Monteverde by recording the CD right there. You get it? They did not go to Cardona, their habitual place, where they have always gone, and are still going to make their recordings, where they could travel easy and fast, would sit on fine and comfortable, yellow-streaked chairs, and go on foot to their favourite caffé nearby, and the trumpet player can ride on bycicle to the rehearsals... Instead, there was much packing and fagging, an immensely expanded budget, endless travel on bus, much dust and cold, because it was January, then the horror of tuning the over-sensitive gutstrings after such a journey, and the top of it all the effort needed to rehearse this not-at-all-easy piece with an unfamiliar, absolutely unknown, local choir… And still, it can be heard that everyone, really every single member fully understood, why it was so important. 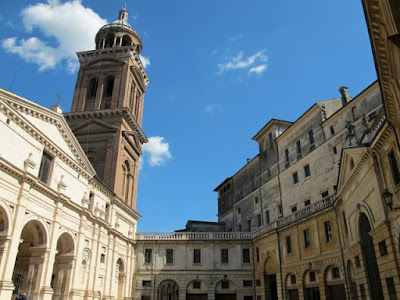 This incredible determination is really touching, and it elevates the level of the interpretation in such a way, that it outruns all the other recordings in beauty. In the booklet Jordi Savall also refers to „this outstanding emotional” thing, but only delicately and casually, although as a matter of fact its intensity must have been so strong, it could hardly fit into the Santa Barbara.

Many-many years later, when dedicating this CD after a torment of listening through the  Musikalisches Opfer at the Budapest Music Academy, I asked him, trying to seem innocent, whether he could still remember the recording sessions, and then he immediately got struck, pen swaying idly in his hand, eyes full of remote starshine, and he said, yes, of course, and adding how beautiful it was… I could hardly breathe… then it was over, both of us coughed politely, he signed me my CD, while angels were fluttering around us, very close…

Some parts, like Nisi Dominus or Ave Maria, require quite an effort not to rewind them over and over, not getting involved more and more, and not to get infatuated too much.
What is this music really like, then? Well, it combines the pureness of renaissance poliphony and the swell of great choir movements, it is as melodic as Vivaldi's music much later, and it elevates the soul to such height, that would only be reached by the strictly rigorous Bach in his most beautiful cantatas.

The quality of sound is especially fine – if we listen to it on a good chain, we almost hear the number of choir members growing, and next to the breaths we begin to hear heartbeats as well. A paragraph in the booklet tells us that after some faint-hearted attempts they decided to record all the music with a single pair of omnidirectional mic, with the minimum of motion of the musicians and singers, which, regarding the complexity and diversity of the piece, is more than surprising. The result, however, is simply enthralling. 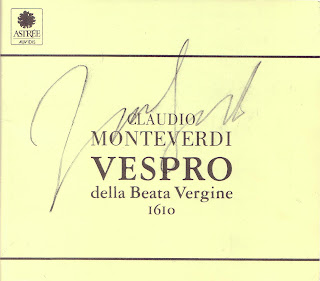 The original first recording is now available only at the price of gold, but the remixed SACD is the best-sounding classical music recording I've ever encountered.

It has been my favourite for almost 20 years. Those who like Vespro, have already got it in stock for sure, but for those who are just getting to know Monteverdi or the era, it is definately a great choice. 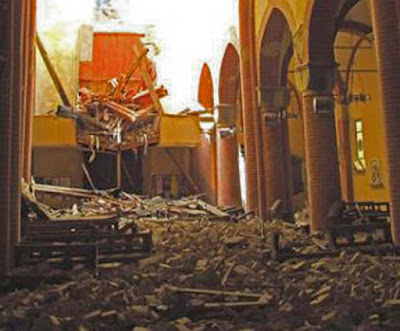 In May, 2012, there was a devastating earthquake in the region of Mantova, and Santa Barbara got seriously damaged.
However, there must have been something in the air, perhaps an extreme concern and love for old things, I don't know, but the church was reconstructed in a very short period, labourers floating between Earth and Heaven, like the souls of ancient saints, trying to bind together the lower and the higher things again. 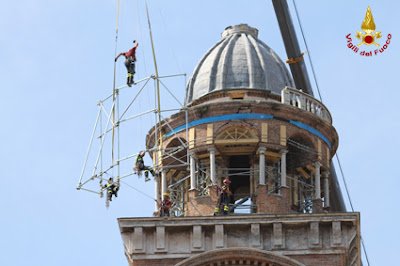